Race Report is out! 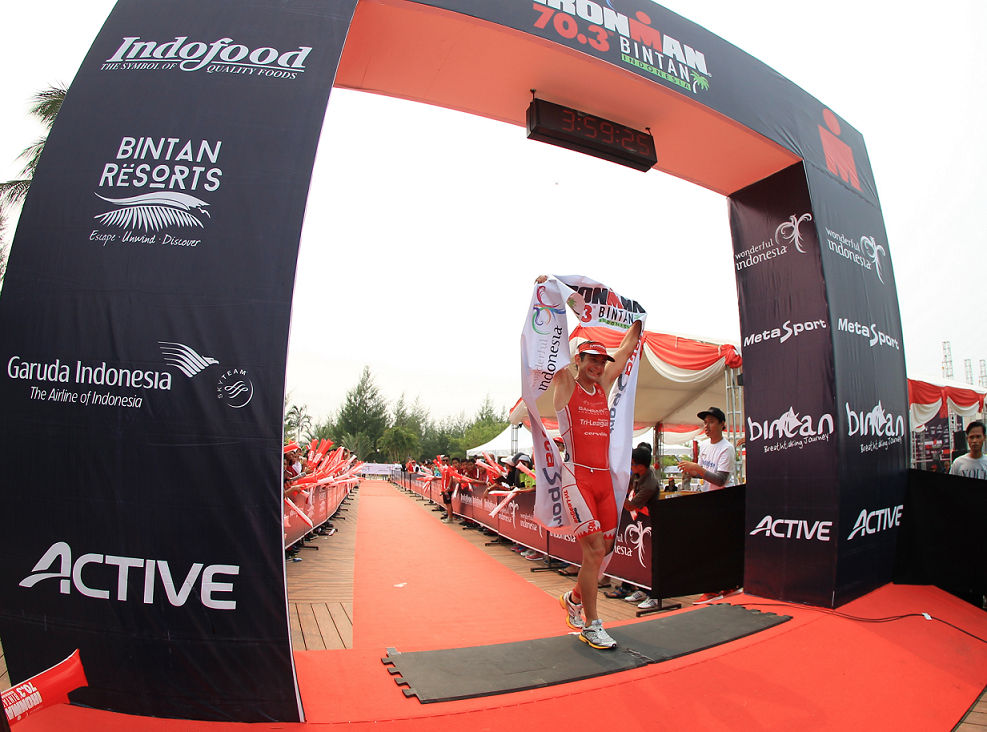 After years of being the nearly man in Bintan, Fredrik Croneborg finally climbed to the top step of the podium with a thrilling win in the Wonderful Indonesia Ironman 70.3 Bintan on Sunday. The Swede caught long-time race leader Matt Burton of Australia with 6km to go and from there strode on powerfully for the win at the Plaza Lagoi, part of the Bintan Resorts development.

Kate Bevilaqua was crowned the 2016 Ironman 70.3 Bintan women’s champion after taking a comfortable victory. The second-fastest woman was actually an age-group athlete, another Australian, Claire Davis, although the pair did not have a head-to-match match up.

The conditions in Bintan were as perfect as they could be for a race set in the tropical splendor of an Indonesian island just a few degrees north of the equator. The always warm Lagoi Bay was pancake flat when the pros entered the water a little after 6am, and with no wind and crucially, overcast but dry skies, the scorching Bintan sun that has left many dreams wilted in the past wasn’t a factor.

The ideal swim conditions didn’t help Croneborg much as the Swede hit the beach 150 seconds behind the first man to exit the water, Clayton Fettell of Australia with a split of 22:28. In between Croneborg and Fettell were another three Aussies, David Dellow, Michael Fox and Alexander Polizzi which completed the lead five into T1.

While Fettell started off gamely on the 90km bike leg, as the course turned left at the 15km mark into a 8km stretch of punishing little hills towards “Checkpoint Charlie”, a quartet behind had come together and it wasn’t too much longer before they made the inevitable catch of Fettell.

This group of five stayed together for the next 30km, with a pair of draft marshals making sure the mini pack didn’t run afoul of the six bike lengths draft zone rule. Croneborg, who seems to thrive in hot races, seemed happy to take more than his fair share of the load, with his rivals equally happy to let him have that front position.

The dynamic of the race, however, changed dramatically at around the 50km mark when Burton joined the lead group. Some four minutes behind Fettell out of the water, the Australian had put in a powerful first stint of the bike leg to catch the leaders, but it seemed at first as if that effort might have been costly, as he sat well off the back.

Looks can be deceiving, though, and some 8km later Burton moved easily to the front of the group and then promptly rode away from his five rivals.

The injection of pace proved too much for Fettel, leaving Croneborg, Dellow, Polizzi and Fox to chase the solo leader. Their efforts were in vain, though, as Burton used his obvious strength and the twisty, turning and rolling coastal section of the course to quickly move out of sight. By the 70km mark he had a lead of 90 seconds, all gained in just 10km.

Burton powered over the reverse “Checkpoint Charlie” stretch then down the hill marking the entrance to the Plaza Lagoi race site. He hit T2 a full two minutes and 40 seconds ahead of the chase pack, thanks to an incredible bike split of 2:05.15 for the 90km.

Onto the 21km run course, which for Ironman 70.3 Bintan consists of three laps of 7km round a beautiful but completely exposed lake. While the sun still hadn’t emerged from behind the clouds, the temperature was definitely rising and combined with a running surface of mostly huge concrete slabs, it was going to be a punishing half marathon.

Burton looked good out front but a grunt or two midway through the first lap perhaps indicated he was suffering a bit and tellingly by the time he ran through the transition/festival zone for the first time, his lead was down to 80 seconds. That gap was from the duo of Croneborg and Fox, who had dropped their erstwhile chasing partners.

The flat and open nature of the running path around the lake meant that the hunters could always see their prey ahead and a clearly shrinking gap seemed to embolden Croneborg midday through the second lap. With Fox unable to match his pace, it was all set for the Swede to mount the main challenge to Burton and he had all but caught the leader as they hit the transition zone for a second time. Perhaps taking some time to recover, Croneborg didn’t immediately complete the pass, but the obviously fresher man didn’t delay the inevitable for too much longer, moving into the lead at the 15km mark.

At first Burton stayed on the new leader’s heels but then the Swede managed to open a 10-second lead through a feed zone. Burton dug deep, though, and managed to contain the gap for the next few kilometres. But with some 2.5km remaining, Croneborg found another gear and steadily pulled away from Burton. By the time he hit the grounds of the Plaza Lagoi for the final time he had the race in the bag and went on to run strongly down the chute through the fan-filled barriers on his way to a famous and extremely popular win.

Croneborg broke the tape with a finishing time of 3:59.27, a full three minutes faster than his third-place effort at the same race last year.

A delighted Burton was the well-deserved runner-up, finishing just under a minute behind the winner, with a similar gap to Fox in third.

The 2016 Wonderful Indonesia Ironman 70.3 Bintan champion expressed a mixture of relief and satisfaction with his win.

“Mostly I’m not on the top (of the podium) so it feels really nice to take a win finally. I’ve been second and third many times but I don’t have that many wins so it’s really nice. Also, today I didn’t expect much but I felt really, really good,” said Croneborg, who raced in the colours of the Bahrain Endurance Team.

“I was quite surprised to catch the front group quite quickly (on the bike) and I was feeling really good. Maybe too good as I did quite a lot of work in the beginning of the ride and I thought I might have used too much energy, but I could still run OK.”

“I raced Matt here last year and also two weeks ago in France and I know he does quite well in the heat and he can keep a good pace, so my goal was to catch him before the start of the third lap.”

A well executed plan and a job well done for Croneborg. 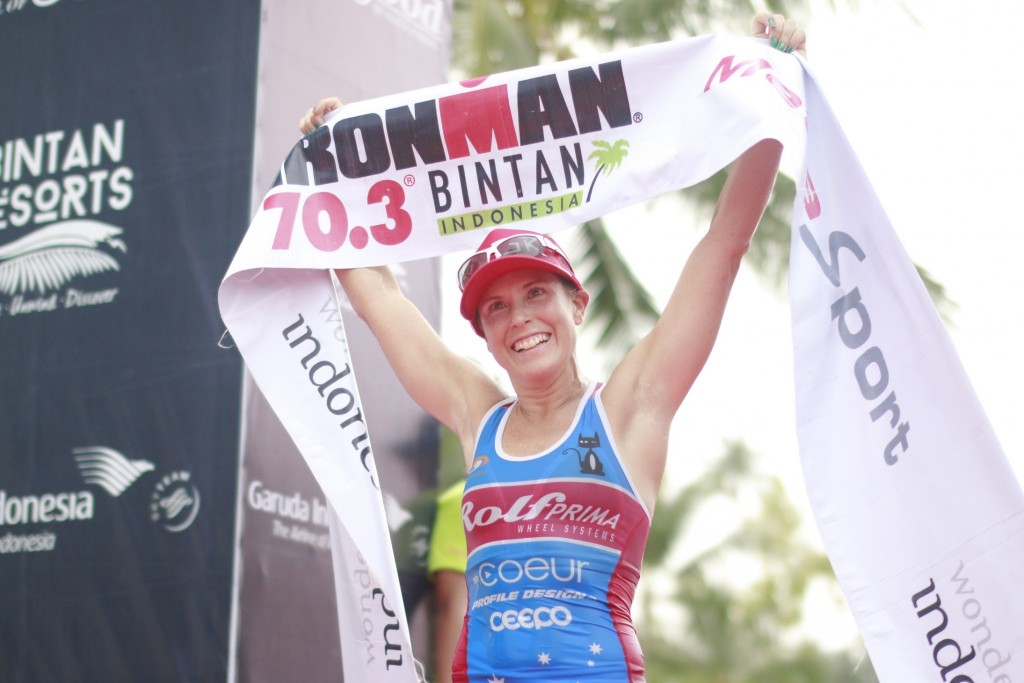 Only three athletes, all Australians, lined up for the Pro women’s race, with Amanda Wilson and Alise Selsmark joining Bevilaqua on the Lagoi Bay beach for the race start.

Bevilaqua and Selsmark quickly left Wilson behind in the water and swam the 1.9km leg together, with Bevilaqua just managing to open up a 7-second gap as they hit T1. After that, though, the race was soon over as a serious contest as Bevilaqua immediately broke clear on the bike and established a lead that seemed to grow with every kilometre.

By the time Selsmark completed her 90km bike leg, Bevilaqua was already over 5 minutes into her run. While Selsmark struggled in her three laps round the lake, Bevilaqua had the luxury of taking it relatively easy, and like Croneborg in the men’s field, could finally revel in a 2016 victory having had a second, third and two fourth place finishes in Ironman 70.3 races this year. She broke the tape in a time of 4:37:26.

Wilson overcame a huge 4-minute plus deficit after the swim to put in solid bike and run legs to claim second place in the professional race, but it was actually the age-grouper Davis who leaves Bintan with the second-fastest bragging rights, her total time of 4:40:51 being three minutes quicker than Wilson’s.

Another 900 age groupers took on the Ironman 70.3 Bintan course, in what was another outstanding triathlon event on Bintan island, one of the foremost destinations for endurance multisports in Southeast Asia.