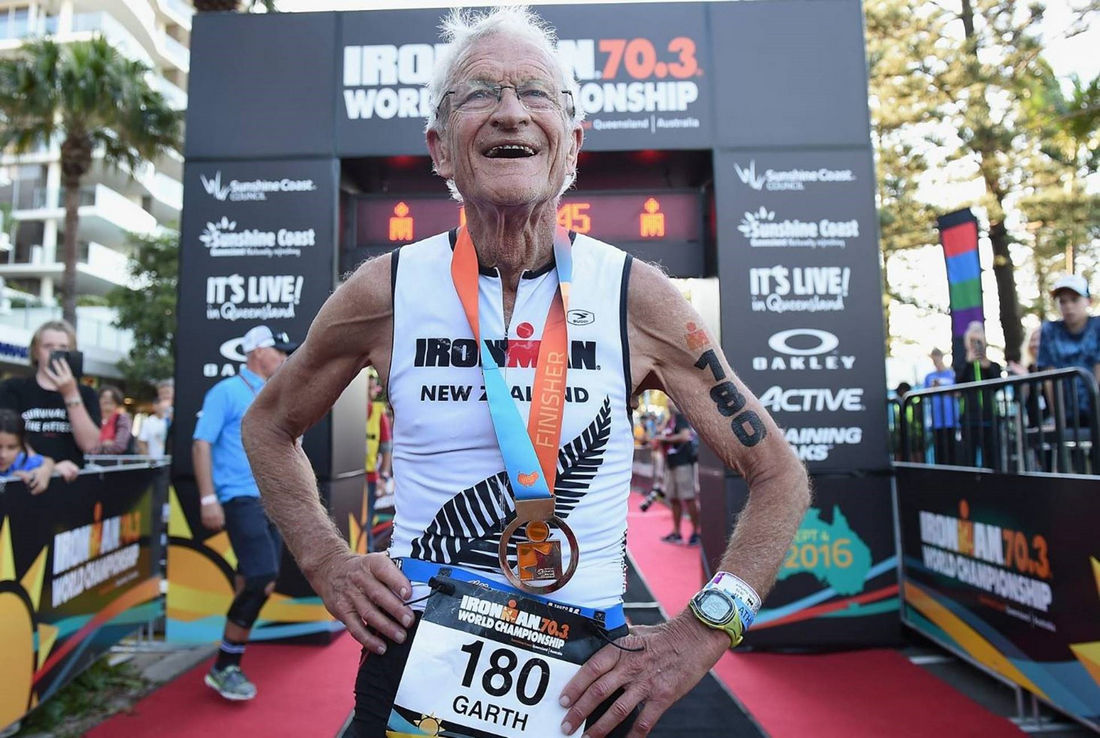 Garth Barfoot is not your ordinary triathlete. Completing 15 Ironmans and collecting multiple World Champion titles is quite extraordinary. However, what really makes him stand out is that he is still racing at age 83! Let’s find out what drives him.

When did you start your triathlon journey and why?

I started in my late fifties. My wife was doing them and I thought I could do them too. But it was not as easy as it looked. In the beginning she would beat me in all three disciplines, swimming, cycling and running. I caught her on the last two reasonably quickly but swimming eluded me. It was not till I retired at the age of 81 and had more time to practice that I was able to close that last gap.

Have you always been into sports? What’s your sporting background?

Possibly because I had a sedentary job (real estate sales and admin), I was always keen on active hobbies, swimming and tramping (hiking with a heavy pack), as were my parents and my siblings. But it was not until I was 50 that I participated in my first race……it was a 10km fun run.

Most athletes of your age have retired from the sport? What drives you to continue training and racing at your age?

The answer is because I can. So many of my contemporaries, most of whom were better than me, cannot. Sometimes I think that is because I started racing so late in life. My body has not had a chance to wear out.

How do you stay injury free?

I don’t. Bike accidents have taken their toll. Both my hips have medical hardware inside them. These days running accidents are the most common. I have too many trips and falls. I try to learn from each one, hoping not to make the same mistake twice.

What is your proudest sport moment?

It should have been completing my first ironman. Yet, at the time my mind was completely occupied with thinking about the mistakes I had made and how I could go faster next time. Yet despite completing 14 more Ironman I never did go faster. Opportunity for celebration lost.

We understand that not all has been smooth sailing. What went wrong in your previous two attempts at completing a 70.3 in Asia?

In both of them I completed the swim and the bike well within the time allowed. But both had temperatures in the mid thirties for the run and on the day. I just could not persuade my body to run in that heat. So in my preparation for Bintan I have put a lot of emphasis on increasing my walking speed as an insurance against not being able to run. However It does sound a bit odd, a guy in his eighties trying to increase his walking speed!

As a multiple age-group world champion, what are still your big triathlon goals?

That is an easy question to answer: Blackout the podium for Male 80/84 years at the World Ironman 70.3 Championships in my home country. This means Kiwis (in black National uniform) will have to come first, second and third. I am third ranked at the moment in that age group, so all I have to do is to come third. Probably easier said than done for someone in the oldest year of an age group.